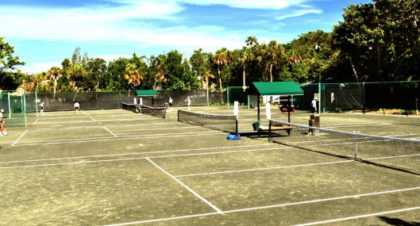 A $13,000 report on the Town Tennis Center has been largely ignored and buried for the last two years and was obtained recently by The Longboat Key News.

The management report was first released in April 2020, amid the turmoil of the first Covid 19 surge when the tennis courts were closed.

Andrew Geller, who plays tennis daily, said that the $2 fees for mixed doubles play could easily be doubled and two more tennis courts would certainly be well used.

Robert Dreyfus calls it  “The best bargain on LBK.”

“Historically many players came to LBK to play at the Colony and many of these players chose to stay.”

PROS Consulting, which specializes in parks and recreation and economic development, delivered an 81 page document Carolyn Brown, Support Services Director, which apparently was not shared with the Town Commission or LBK Mayor Ken Schneier, and was not posted on the Town’s website.

The report was not shared with tennis center employees, only with the manager.

One recommendation was to have the courts open until 7:30 PM during the summer months when there is more light. Now some days they are only open until 3 PM. Last summer one tennis player was playing at 4 when the police came by at the behest of Town Manager Tom Harmer and removed the players.

Twenty interviews were conducted with the administration, Tennis Center staff and employees, and members of the facility.

The main criticism of the report, by insiders, is that it did not consider the unique nature of LBK. For example, the consultants compared prices with other public facilities in Florida, but failed to realize that LBK serves a wealthier population than 99% of Florida towns. Its tennis players are more demanding. It functions more like a private tennis club, but does not charge as much.

The price of tennis…

Sportime, a private tennis club in East Hampton, NY, charges $350 for an hour lesson with the head pro, and $250 a lesson with senior pros, and $180 with college players. The LBK Club Tennis Center charges $110. The Town LBK center charges $72 for lessons.

Tom Ivaskiv, a tennis member, says that he would gladly pay more for membership in exchange for improved facilities: Better showers, possibly a club house, better viewing stands to allow for tournaments. “All would be welcomed.”

“It would be nice to expand the tennis Center to add a few more courts especially as the land is available adjacent to the existing courts in the Village Green.

“True…seasonal demand is high, but given the number of people migrating to Florida each year, demand for facilities is increasing.”

Rich McGrath, who heads Friends of Tennis, which has supported the center with over $200,000 over the years, expressed his support for raising fees and adding courts.

“Originally the Town didn’t want to pay for anything,” McGrath said. “But over the years that attitude has changed.”

Today the Tennis Center breaks even on operating costs, saving the Town a lot of money. Other public tennis facilities lose money. Payne Park in Sarasota generates only 60% of its operating costs and the city kicks in the rest. Orlando tennis courts bring in only 30% of their operating costs.

When tennis players were surveyed they described the employees as “personable, available and accommodating, making tennis fun.” The players also said the teaching staff offers a sense of community and felt fortunate to have such a facility on LBK.

The Tennis center is the heart of LBK socially in that it brings people, visitors and residents together, said one tennis player.

Mostly, players like the way the facility is managed. Positive friendly staff and the best tennis facility experience ever encountered. The staff and volunteers are considered the strengths of the facility.

They also said that the 10 HarTru courts offer great quality and value for the dollars spent.  Member relationships and the sense of community that the facility brings to users is exceptional.

But the report did point out some weaknesses. The facility’s exterior appearance does not measure up to the spectacular appeal of Bayfront Park.

What do People Complain About?

Availability of courts during peak seasons is a common theme among players. There are a significant number of leagues that have the lion’s share of the court time, thus offering little time for walk-on or lesson programs during prime time.

Members have concerns about the maintenance and upkeep of the facility. Items most mentioned include court grooming and the maintenance of the court lines and restroom cleanliness.  According to interviews, it is difficult to identify people who can help with the part-time needs for court grooming/brushing. That work requires about 90 minutes per day if it is only groomed one time per day. Many times, the dry weather requires multiple grooming sessions.

One experienced maintenance man, Jim Purcell, used to groom twice a day, but he left five years ago. The courts have never been the same. Most tennis clubs groom their courts at least twice a day.

Increasingly, towns and planned communities have come to the realization that what makes communities thrive are amenities — parks, trails, tennis courts, community activities, clubs, theaters — that cater to the particular population of those towns, Like The Villages.

Longboat Key is particularly blessed to have one of the best beaches in the world, but urban planners warn that overbuilding and stripmalls can often kill the goose that lays the golden eggs.

Women feel it is hard to break into groups when you are new to the tennis center. The contrast between men and women is large regarding the level of acceptance. To improve onboarding and giving new members an opportunity to become acclimated, they indicated the desire for staff to create an orientation program through semi-private or group lessons to evaluate play and be able to effectively place players new to the center.

The practice tennis court appears to not be getting the use that was anticipated prior to its installation.  With a few exceptions, the court is used almost exclusively by people who wish to rent the ball machine. The professional instruction staff very rarely use this court to teach lessons. The annual percentage of court use on this court is 27%.

The major themes associated with strengths include additions of amenities to the facility that were completed by the Town, terrific support from the Friends of Tennis, and the benefits the facility offers the community as a local public asset. Weaknesses are also themed into key areas. The need to improve the ambiance of the gateways to the facility, improvements to interior spaces of the clubhouse, and adjusting a little used court to improve the potential to generate revenue.

Paving not wanted, but night lighting?

One suggestion the consultants made was to pave the parking area for $75,000. “Which is crazy,” according to visitor Jane Makley. “Paving is harmful  to the environment, and it also degrades and looks crummy. The gravel parking areas with the overhanging trees are classy and unique, which is what Longboat Key is all about.

Opportunities that might be explored, is a relationship with Publix to provide quality food products to the Tennis Center, the study suggested. Of critical importance is fully incorporating the Chelsea computer software to monitor use, which can result in a reduction of significant time managing the paper court sheets that are currently used.

The threats that might come from night lighting would be less on the three courts adjacent to the Tennis Center and may not be as objectionable to the neighbors. Night lighting for play when it’s cooler is supported by many members. Rust is forming on the fence posts that support the fence line and access gates to the tennis courts.

Kay Thayer, the Center Manager, said that painting the main building and replacing the fencing will be done in the summer. Sometimes she sweeps the courts in the afternoons because there is nobody else to do it. “We all chip in,” she said.

Suggestions from the Report:

1. The Center Manager needs to spend less time on the tennis court teaching and more time addressing the managerial needs. Pay structure may need to be altered to ensure her marketing and customer service skills are rewarded.

2. Determine skill level of professional instructors. Those instructors generating an income that is equal to 65% of the lesson income need to have their lesson fee increased to allow the Tennis Center to generate a higher percentage of revenue. For example, member rates could be $50/half hour, $95/hour and $150/90 minutes.

4. Bring on a full-time staff person to manage maintenance of the courts, conduct court monitoring activities to ensure payment from players but to more importantly serve as the court customer service greeter and an extension of the front desk. This person could generate revenues by becoming the racquet stringer.

5. Hire the Administrative Assistant who currently conducts all retail business ¾ or fulltime to manage the in-house marketing and website management of the organization.

1. Create Tennis Center “Hot Buttons” on the new Town of Longboat Key website that is interactive and communicates the services of the Tennis Center including opportunities for registration in various programs and the lottery.

2. Identify an email service that will effectively communicate with the membership.

5. Conduct a membership survey once every three years to understand the interests and needs of the members. and communicate the results of the study and indicate action that will be taken from the feedback.

6. Initiate an opportunity for program participants to provide evaluations of the activities that are conducted by the Tennis Center staff and professionals.

7. Create an “onboarding” practice that is designed to welcome new membership.