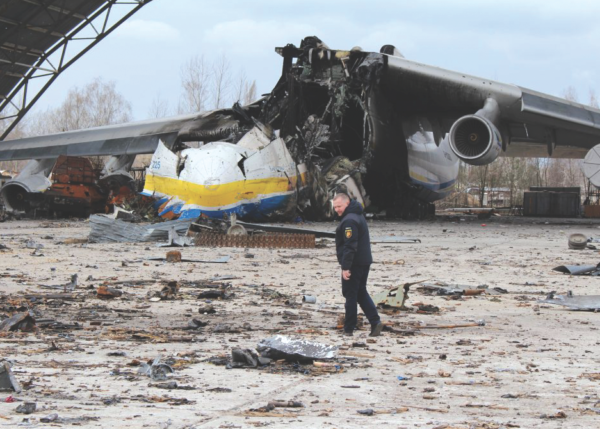 When a drunk-with-rage husband takes a knife to his wife, when a child is abused by a parent, when a bully strikes innocents, most humans are moved to protect the victim and punish the offender especially if they have an advantage. To do less is cowardly.

To do business with the bully while he kills is aiding and abetting the criminal; providing support is collaboration. To watch from safety as Ukrainians die for democracy is gutless, especially for those who promised security guarantees in exchange for it having giving up its nukes.

The world’s strongest democracies are doing just that. They watch as Vladimir Putin charges on innocent Ukraine with his four horsemen of the Apocalypse.

They watch and offer the equivalent of sticks and stones – incrementally, so as “not to provoke the bully” — while he bombs, rubbles cities, abducts, executes, rapes, tortures and starves humanity like his supreme model, Stalin, did in concert with Hitler some 80 years ago on the bloodlands of Ukraine. Ukraine pleads for help. Russia increases its kills. NATO watches short of brave, new initiatives.

Eventually a movie will be made. Ukraine will be the hero, Russia the culprit and NATO, US and EU the cowards “united like never before”. Western leaders have yet to step in with defence hardware that will ensure victory for democracy. They haven’t provided their own human fighting power. They watch awed by the victim’s bravery but fortified in their false rationalization that staying out of the fray is in “everyone’s interest”.

Their rationalization of non-involvement is rooted in their minds despite the reality that the West’s military strength and nuclear deterrent is unsurpassed. That is why Russia bellows: NATO stay out! They listen, fuss about their self-created dependence on its energy, and delay more meaningful help and in so doing possibly grant it a victory.

This is manna for Putin. It bolsters his global leadership: Nearly half of the UN members abstained or voted no to Russia‘s removal from its Human Rights council. Just days ago, some 5,000 cars raced around Berlin flying Russia’s flags.

Meanwhile, democratic leaders are losing face on the world stage. Old military hardware, admiration for Ukraine’s heroism, promise of war crime tribunals are okay but they don’t ensure a robust victory against the killer. Nor do they replace moral virtue lost by watching when action is required.

The defenders of the democratic world are immobilized because they have no scenario for a defeated Russia. They had been cowered by Russia’s arrogant and false claims of its great history and outlandish security demands rather than lay plans for Europe’s future by refuting the rhetoric and punishing the crimes. They forgot how easily the U.S. sent it packing out of Afghanistan in 1989 (by granting appropriate weapons, of course), or how Ukraine pummels it today. They were and are afraid.

It is not afraid of Russia and has victory in mind because it knows Russia’s timber. So do the Baltic states and most other former satellites. They did it; they collapsed Russia’s USSR concentration camp and now want to finish the job.

This could happen if all NATO members worked on a vision rather than fret about Russia’s false claims to “great” imperialism or swallow its nuke threats. Those who have lived under it have always known that it was never great; that it’s a liar and a fearmonger. Today, all should know that.

The free world leaders need to be more ambitious than to be satisfied with NATO’s “unity”. They might determine to rid the world of a bloody dictator and his autocratic crimes. Act to make the elimination of dictators the 21 st century’s gift to humanity. Start today with Russia’s.

Big thinking is needed to change civilization. Much that was acceptable not too long ago is no longer tolerated like wife-beating or child abuse. The Weinsteins, Epsteins, Maxwells — are punished severely to serve as models in eradicating such deviations.

History is providing NATO with a great opportunity to eliminate dictators like Putin. He is pushing civilization back to the dark ages. For civilization to move forward Russia must be stopped and punished. Yes, throw it out of the G20, WTO, SWIFT, all political, economic, trade, cultural sports federations. Stop buying its energy. Banish its diplomats.

Turn off the heat and hot water in its embassies, spray its properties with red blood, deprive Russians of western citizenships. Do it, but know that none of these will guarantee the end of its evil intentions in Ukraine, Europe or the world. Victory is won on the battlefield.

NATO and EU democracies give Ukraine everything you can. Together you will win.

Oksana Bashuk Hepburn, formerly a long-term senior policy adviser with the Government of Canada and president of U*CAN, a consulting firm brokering interests for Ukraine, comments in international media on its determination to be a free European country. She lives part-time on Longboat Key.